What do key lime pie, cheesecake, and chocolate dream pie all have in common? You've got it! Graham cracker crusts!

This scrumptiously simple vegan graham cracker crust recipe creates the perfect foundation for any cream pie, cheesecake or dessert that requires a firm, sweet, and slightly crunchy base. Unlike pastry pie dough, which often involves kneading, refrigeration, rolling, shaping and baking, this ridiculously easy crust can be thrown together and baked in 15 minutes! How sweet is that?

There's just something about a homemade crust that tastes so much better than a pre-made one from a store shelf, particularly this simple vegan graham cracker crust. If everyone knew how super easy it is to make their own tasty pie crust, I doubt anyone would buy one again.

Not always. Many graham cracker brands use honey in manufacturing their products. It may be surprising to learn that honey is not a vegan-friendly food. While some people who follow plant-based diets choose to consume it, most vegans do not. Veganism as defined by The Vegan Society, is a philosophy based on the belief that animals (including bees) are not ours to harm or exploit.

🥕Did you know you can make your own vegan clover honey? It's delish!

How to make the best vegan graham cracker crust

You can make this 3-ingredient crust, start to finish, in about 15 minutes! I like to buy whole graham crackers and crush them into crumbs, but you can also use boxed graham crumbs as well.

🥕 See the printable recipe card below for quantities & details

Sugar - we use organic cane sugar, but can be substituted with a granulated sugar of your choice.

🥕 Be sure to watch the video on making this easy recipe!

They should be the consistency of fine crumbs.

Bake at 375º for 8-10 minutes or until crust is lightly browned.
Allow to cool completely before adding filling.

Just a few basic cooking tools are all you'll need:

This simple vegan graham cracker crust is the perfect base for the most luscious & rich Easy Vegan Chocolate Dream Pie.

If you love making pies, here's a few of our favorites:

Why are they called graham crackers?

Apparently, the origin of graham crackers is traced to a preacher named Sylvester Graham who was part of the 19th century temperance movement. He advocated a vegetarian diet, was big into bread made from coarsely ground wheat, as well as a number of other beliefs he felt would benefit mankind.

Can I use a spring form or cupcake pan with this recipe?

Spring form pans are commonly used in cheesecakes, and yes you can definitely use it with this vegan graham cracker crust recipe. You can also use cupcake pans for mini cheesecakes or key lime pies. I suggest freezing or refrigerating the desserts before removing from a cupcake pan.

What can replace graham crackers in cheesecake or pie crusts?

Grahams crackers are always my first choice for this recipe. They're just dry enough (without a lot of added fat), to stay crisp while baking and creating a crust that isn't likely to fall apart. If you can't find vegan graham crackers, a few commonly used substitutes are Biscoff cookies, Oreos (yes, they're accidentally vegan), and some ginger snaps.

Do I need to pre-bake the crust before adding the filling?

Yes, I recommend pre-baking the crust, even if you will be baking it again with the filling.

⭐️⭐️⭐️⭐️⭐️ If you enjoyed this recipe, please rate it in the comments below. Sharing your experience helps others decide if they should give it a try too. 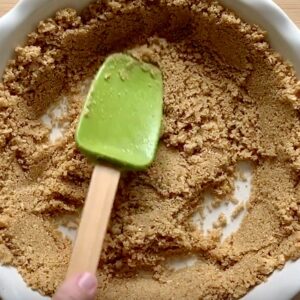 Hi, I'm Connie! I created The Carrot Underground🥕 as your place to find easy & delicious recipes and inspiration for enjoying the goodness of vegan living.

Learn more about my story →