The Power of One 🌎How Being Vegan Can Save the World

Sometimes it seems like the world is spiraling out of control. We are confronted with a seemingly endless stream of bad news everyday – human suffering, pandemics, global warming, animal extinction and exploitation – it can be overwhelming and deeply disheartening. Unless you disconnect yourself completely from all social media, online news sources, radio, newspapers, or television, there is no way to avoid the continual onslaught of horror stories occurring around our precious planet 24/7.

The complexities and sheer number of issues we face can seem unsurmountable, so much so, that we often allow ourselves to accept defeat. The problems appear so much larger than we are, we feel helpless to fix them. Sure, it’s pretty easy adding our names to online petitions, a simple click and one’s conscience is momentarily assuaged. Sharing posts to our social media pages is another relatively effortless way to alert others to a cause that concerns us. But what about doing something that can directly help solve the problem, in a powerful and measurable way?

How Can One Person Help Save the World?

Despite all the bad news, there is also very good news, and here it is: You can change the world. I’m not being cute or flippant, I’m quite serious. If I told you that, by making a basic lifestyle choice, you have the power to create a positive impact on our planet, your life and the lives of thousands of others, including animals, would you do it? Yes, one person can help save the world and that person can be you, simply by being vegan.

Why Should You Choose Vegan Living?

Most of us are very aware of the atrocities and abuses inflicted on factory farmed animals. Certainly, animal suffering should be ample reason to stop contributing to industries that exploit sentient beings. But the problems with animal agriculture far exceed beyond animal cruelty. Research has proven that the meat and dairy industries are two of the largest contributors to global warming and environmental destruction through deforestation and emission of greenhouse gasses, as well as contamination of our water supplies.

According to The United Nations Food and Agriculture Organization, “The livestock business is among the most damaging sectors to the earth’s increasingly scarce water resources, contributing among other things to water pollution, euthropication and the degeneration of coral reefs. The major polluting agents are animal wastes, antibiotics and hormones, chemicals from tanneries, fertilizers and the pesticides used to spray feed crops. Widespread overgrazing disturbs water cycles, reducing replenishment of above and below ground water resources. Significant amounts of water are withdrawn for the production of feed.”

Fortunately, some of today’s most forward-thinking business leaders, including Microsoft CEO Bill Gates, are addressing the urgency for the global population to re-address our dietary choices by eliminating the consumption of animal products. Virgin Airlines founder, Sir Richard Branson was recently quoted as saying “I believe we will look back and be shocked at what was the accepted way we killed animals en masse for food. I think that in the future clean and plant-based meat will become the norm, and in 30 years it is unlikely animals will need to be killed for food anymore”.

How Does Veganism Affect the Planet?

After raising two kids to adulthood in a meat-free household, I was curious to see the combined results of our family’s impact toward affecting positive change. I was astonished at the numbers. Between the four of us, we have saved more than 28,000 animals lives, millions of gallons of water, and hundreds of acres of forest. It felt tremendously good knowing that, by choosing a plant-based, cruelty-free lifestyle, we have contributed to protecting our planet and its inhabitants in a powerful and measurable way.

The Power of One

Here is the difference being vegan for one year can make:

Check out this website to calculate how much you’ll be helping the planet by being vegan: http://thevegancalculator.com/

One person can make a powerfully positive difference in saving the world! 🌎

🥕Here’s some wonderful resources to help you in your journey to vegan living.

When I started my journey into plant-based living, I was the only one I knew who kicked the meat habit. At first I felt quite alone, but I knew in my heart I had made the right choice, for myself, for the animals, and for the planet. Over time, many of my friends and family joined me by choosing to not consume meat. Today, 44 years later, I am more convinced than ever that each and every one of us possess the ability to influence positive change in our world.

I believe you will find choosing a vegan lifestyle to be your best decision yet! I believe in the power of one. Be the one.

Thank you for being vegan 💚 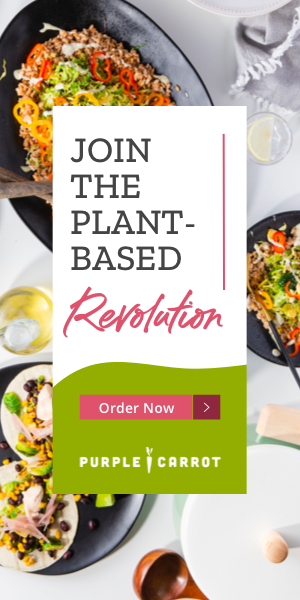 Why I became vegan. 🥕 The journey was good, the arrival even better. "Long before it was a ...

END_OF_DOCUMENT_TOKEN_TO_BE_REPLACED Having the right tools makes cooking so much easier & a lot more fun! The good news is, ...

END_OF_DOCUMENT_TOKEN_TO_BE_REPLACED Being kind and finding inspiration from others. Rabbits have always held a very special place ...